Spherical video is tricky. The process of stitching together multiple images to create a equirectangular projection image doesn’t give you an exact image resolution. So what resolution should I be outputing my video to? Too low a resolution and you’re loosing detail. Too high a rendered resolution and you’re wasting bandwidth as no more details are created when an images is scaled up.

In using the new Vuze Camera from HumanEyes, I wanted to figure out what the ideal rendered output should be to maximize image quality and minimize file size waste. It’s easy to output to 4096 x 4096 px and be done with it, but that resolution of is not easily playable by most devices today, and it may be a waste of bandwidth.

So the goal is to get a ballpark idea of what the final rendered resolution should be based on the data recorded by each sensor, in order to retain as much detail as possible from the raw footage to the youtube file as possible, in order so the viewing experience is as sharp as possible when viewed in 3D 360º, without wasting extra file size. 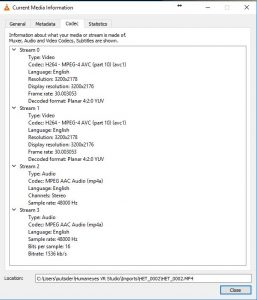 Each of the two video streams capture 4 cameras views. The views are the spherical view that the actual sensor sees.
Pretty elegant method to encode 8 camera views. I think the sensors are 1920x1080p capture devices.
As you can see from the image below, the image or rather the sensor is rotates 90º, so that wide part of the sensor (the 16 part of 16×9) captures the image top to bottom which is 180º worth of data. The width of the sensor (the 9 part of 16×9) captures the lateral direction of the image. This makes sense since laterally each camera only needs to capture 90º, which means there’s some overlap in the images which helps with the stitching.

This tells me that there is no point in rendering the video to a 4096 width resolution since the max pixels available is 3200px across.

The 4k preset in the Humaneyes VR Studio softwaere (the software that stitches the video) is 3840 x 2160px. That format stores two video streams (Left and Right eye) in one file so each eye gets a resolution of 3840 x 1080px.
However a lot of information is lost since the 1500px worth of info is crammed in 1080pixels.
A more appropriate video resolution for a final output should cover 3200 x 1500 px per eye, but I don’t think 3200px wide is a standard resolution so 3840 is the next closest resolution. Similarly, I don’t think 1500px is a standard resolution but I have seen 1440px listed as an option in Youtube, and 2880px is considered 5k by Youtube, so I’ll use that insead

The resolution to try is 3200 x 2880px. This is very close to the native resolution that can be generated by the image sensors on board the camera, which means you’re not wasting any file size for no extra detail. Youtube accepts this resolution (2880 is considered 5K)